Thirty-two times in a row now I've failed to win the Nobel Prize. Each year I have to swallow the same bitter medicine. These Nobel Prizes celebrate the extraordinary achievements of extraordinary people and they show me how worm-like I am in comparison. But there is a way to overcome this. If you, like I, have the post-Nobel blues, then this article might help. 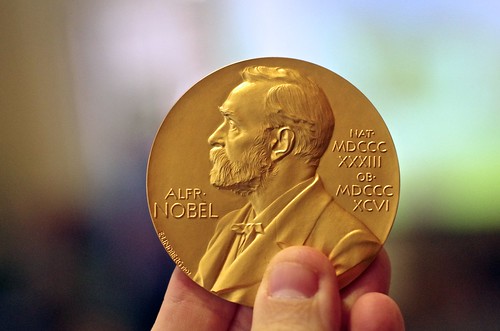 The Nobel prize for Medicine 2015 is well-deserved, as usual. Youyou Tu, William C. Campbell and Satoshi Omura have been awarded the prize for two separate anti-parasitic drug discoveries.

Youyou Tu has been awarded the prize for developing the anti-malarial drug artemisinin. In the 1960s, in the middle of the Vietnam war, Mao Tse-Tung realised he needed a new antimalarial; more soldiers were falling to malaria than to enemy bullets. There was an existing drug, chloroquine, but malaria parasites had largely become resistant. Hundreds of Chinese scientists were engaged, and Youyou trawled through ancient Chinese literature for an alternative cure for malaria and discovered artemisinin.

Malaria is a single-celled parasite transmitted by mosquitoes, killing over half a million people every year, most of whom are children under five in sub-Saharan Africa. The major symptoms are fevers, anaemia as the parasite destroys the red blood cells, coma, and death. Artemisinin, in the past 15 years, has averted about 145 million clinical cases, saving hundreds of thousands of lives.

300,000 people are irreversibly blind as a result of onchocerciasis, caused by larvae dying in the eye. Over 120 million people are affected by lymphatic filariasis. Filarial worms block the lymphatic system, often in the leg or genitals, causing swelling and hardening due to bacterial infections. The disease is stigmatising, resulting in sufferers sometimes becoming outcast from their own society.

For decades before ivermectin was developed, the only treatment for onchocerciasis was DEC. A major side-effect of this drug was to make the patient blind. An alternative, Suramin, was worse, producing fatal side-effects. In contrast to DEC, ivermectin kills the worms slowly, preventing a dangerous immune response to the killed worms. Since the 1980s ivermectin has reduced the burden of onchocerciasis alone by 9 million disability adjusted life-years (DALYs) and will play a key role in the eventual elimination of both onchocerciasis and lymphatic filariasis.

Youyou, Campbell and Omura, in short, are good at making me feel bad about myself. Other Nobel prizewinners have also directly saved millions of lives. Those for , streptomycin (1952), yellow fever (1951) and DDT (1948) are good examples. How am I ever to compete with this magnitude of do-goodery? Do I have to be a Nobel prize-winning researcher to do this much good?

The answer is, yes, it certainly helps. The careers advice group 80,000 Hours have recently assessed biomedical research as a career option and conclude it has potential for very high impact, if you are a good fit. Biomedical research can dramatically improve people's lives even if it doesn't earn a Nobel Prize for its investigator. However, it isn't the only way a person can do good, and even a Nobel Prizewinner will have little positive impact unless somebody does something with their work. As John Donne famously said: "No scientist is an island."

Campbell, Omura and Youyou don't pay for the production and distribution of artemisinin and ivermectin. They couldn't even if they wanted to; it costs too much. The money comes instead from institutions and individuals. The funding for those institutions, like the WHO, USAID, DfID and so on, come from taxpayers or from donors.

This is the crucial point: it is a community of people who have impact, not any one individual. Without Campbell, Omura and Youyou, there would be no artemisinin or ivermectin to distribute. But it is also true that without funders, including you and I, these drugs would not reach the people who need them.

When it comes to doing good, the impact of any one individual is almost negligible compared to the impact of the community. There are a few individuals who have a huge positive impact by themselves. Bill and Melinda Gates and Warren Buffet are obvious examples. I want to argue, however, that the people with the most power to do good are you and I. This is demonstrated by Giving What We Can.

Giving What We Can was founded in 2009 and has recruited 1300 members. This community has pledged a small fortune to high-impact causes, including antimalarial bednet distribution and deworming. $486 million has been pledged and almost $10 million donated. 1300 members is about the size of a small village. How many more Giving What We Can-ers would be required to match Bill and Melinda Gates' generous pledge of $72 billion? A quick calculation tells me we'd need less than 200,000 new members. In other words, a couple of large towns, or a decent-sized concert audience, has as much power to end global poverty as Bill Gates. If everyone earning the US median wage gave 10% of their income, it would dwarf the contribution of any individual billionaire.

Making the world a better place isn't a solitary endeavour. If you have the right skills, you could develop the next life-saving drug; or you could earn as much as Bill Gates and donate it all to charity. Without a collective effort, however, involving us all, we won't achieve what we need to achieve and eradicate the scourge of extreme poverty. Join Giving What We Can, take the 10% pledge, and spread the word. It's the perfect antidote to not winning the Nobel prize.